In nominal operation mode the inductance L1 is in resonance operation mode with the capacitor C and supplying the maximum constant current through load Z. This output current is "impressed" and does not depend on the size of the load impedance Z. When the SCR controller is switched on, the Lscr inductance and the C capacity are switched on in parallel and resonance mode is interrupted. This controls the amount of output current Iout within a certain area.

At 3-times mains frequency, inductance L3 is in resonance with capacity C and derives the third current harmonic from the constant current transformer.

Transformer T is used to adjust the voltages. Figure 2 shows a version of the constant current transformer illustrating the transformer's combined primary winding and the L1 winding for the L1L2 choke. For design reasons, the laminations for transformer T and choke L1L2 must be identical which always results in higher material costs. To this must be added the extra costs for fitting a common winding. However, when supplying power at several input voltages, only one set of connection terminals is required.

To optimise the size of the Lscr choke, it is possible to provide 2-3 taps at the secondary winding.

Figure 3 shows the auto-transformer connection between the C winding and the load winding. This design saves on materials and it would be an advantage for constant current transformers with output voltages up to 2000-3000V. 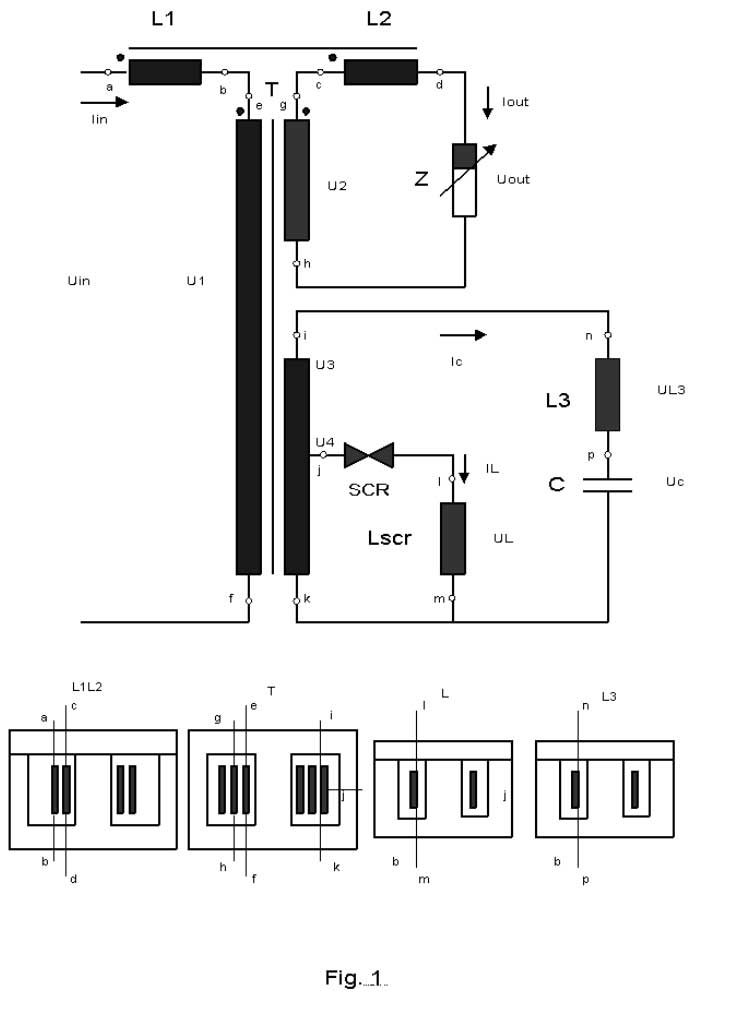 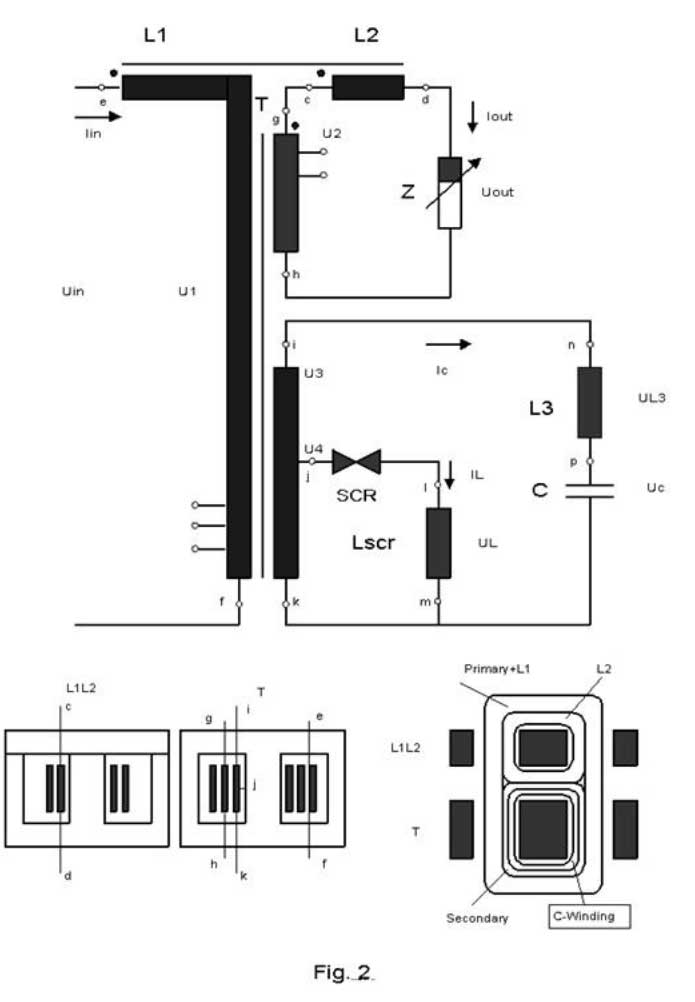 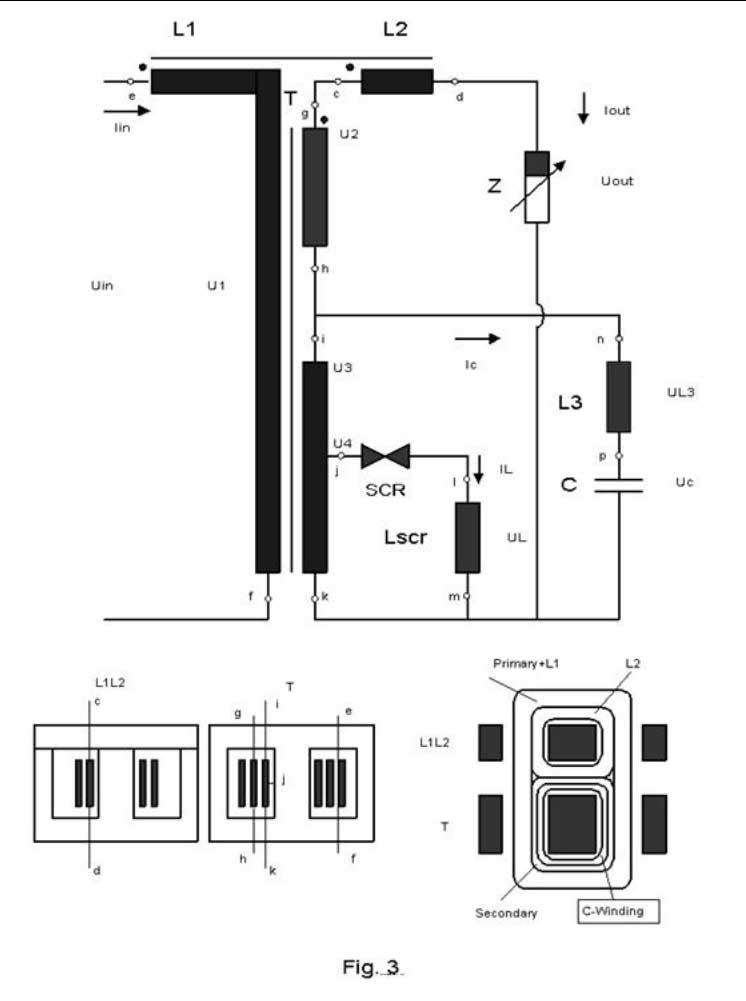 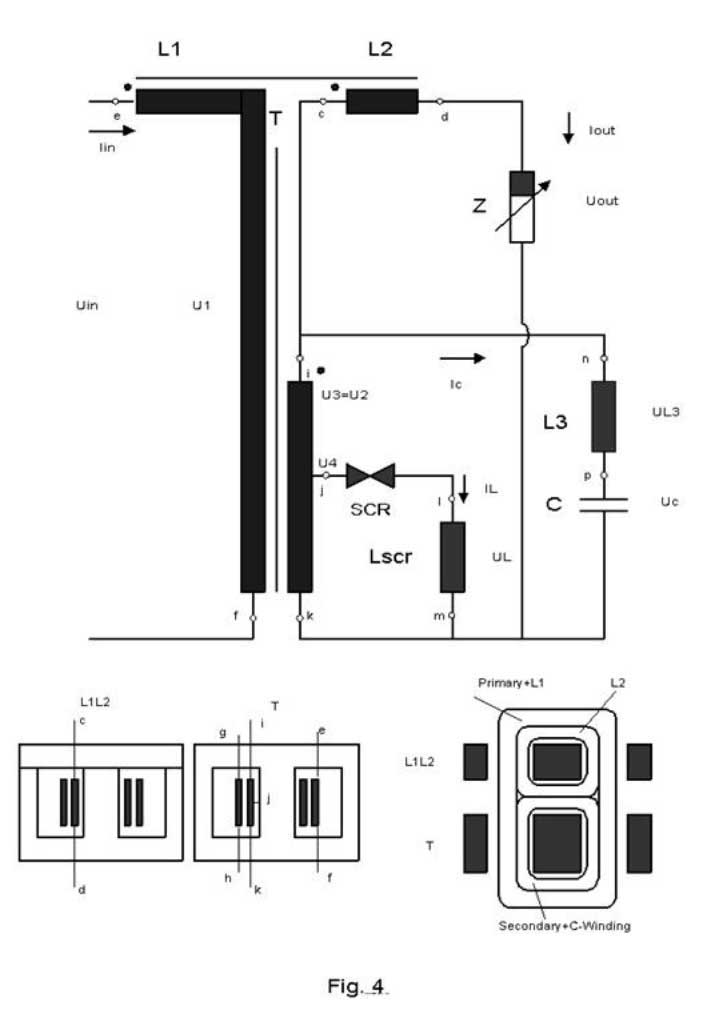 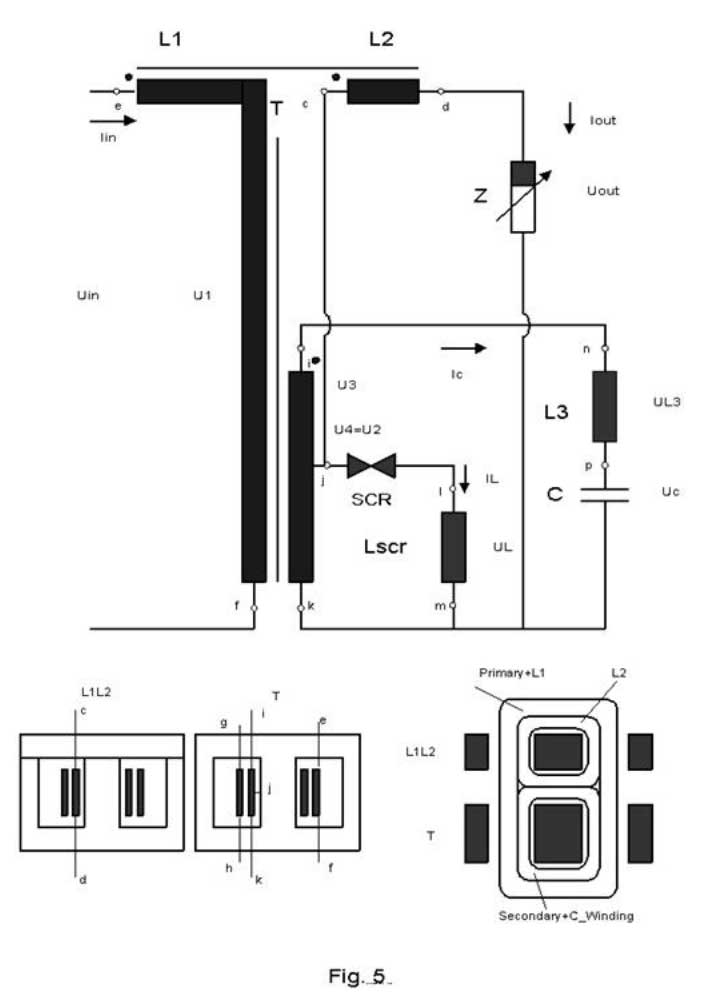 The basic circuit for a constant current transformer is shown in figure 6. The following applies:

The underlined parameters are the complex variables, referred to the input voltage Uin.

The calculation is made as follows:

Once the following simplifications have been made, the load current I'out is calculated as follows 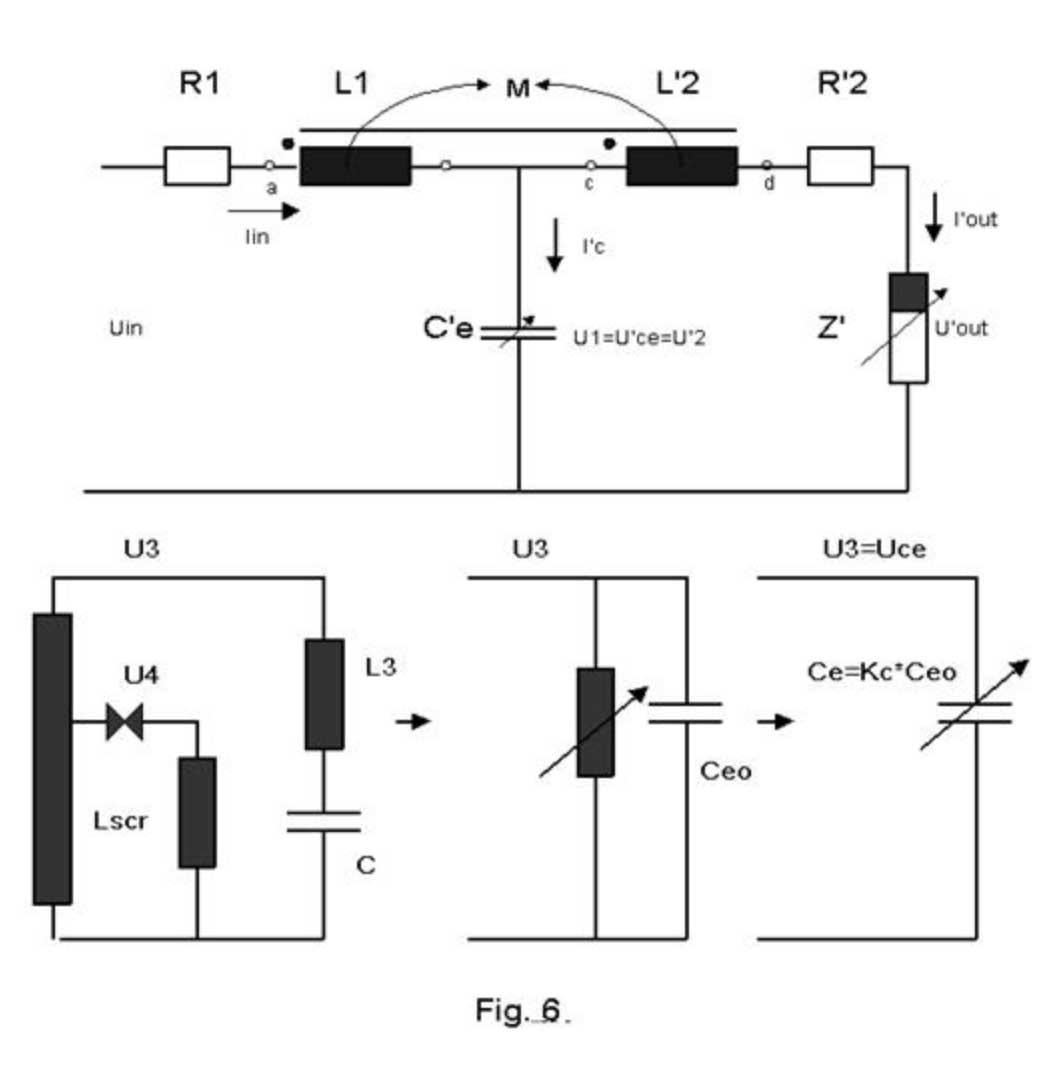 In the same way, it is possible to derive the formulae for calculating the input current and the capacitor current:

Inductance of chokes L1 and L2

On the other hand,the following applies:

Capacity Ce is a resultant value from the serial circuit of the L3 choke and capacitor C (see figure 6).

At the same time the equivalent capacity Ce of the L3-C serial circuit must be in resonance with inductance L1.

Figures 7a and 7b illustrate the vector diagrams for the constant current transformer in resonance operation mode with the pure ohmic load and K=1 resp. K=0.9. Figure 7c shows short circuit operation. In Figure 7d K=0.9 and the power factor of the load is 0.7 (inductive). In this operating mode the capacitor voltage can be considerably greater than in nominal operation mode, which may result in an increase of the capacitor current and can cause an induction in the core of transformer T. At this point, it should also be mentioned that the power factor of the input current is capacitive with an inductive load. 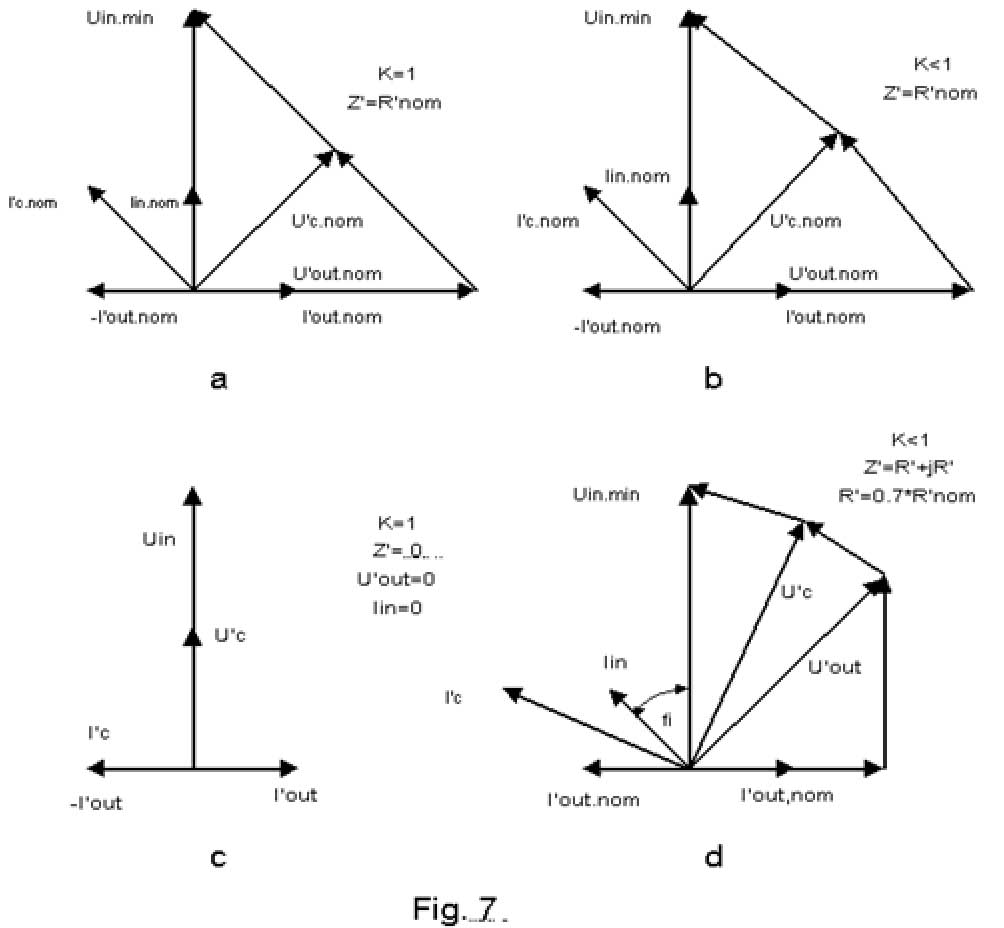 Example of a calculation for the resonance operation mode 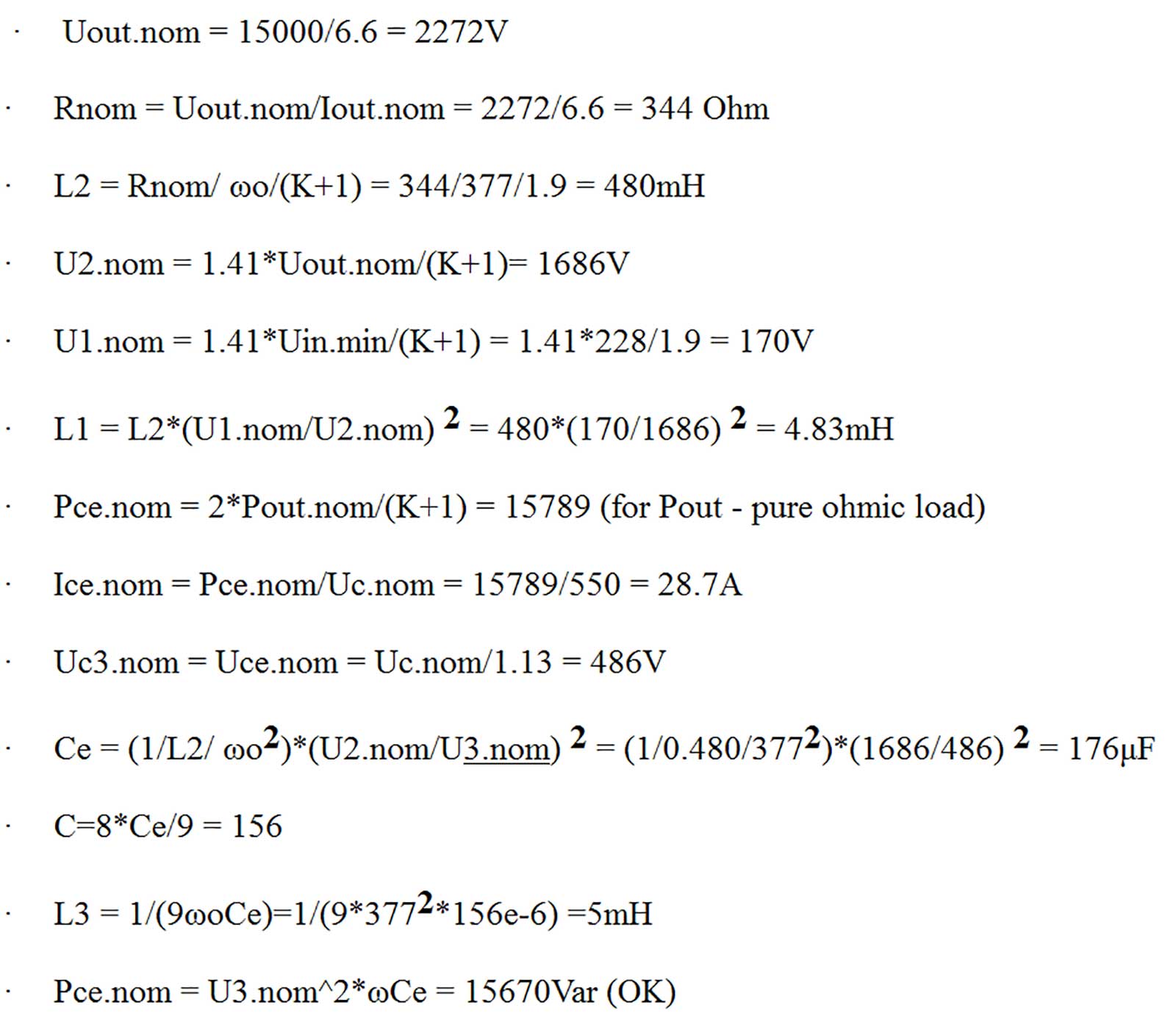 With a pure ohmic load, the power factor in resonance operation mode is always equal to 1.

With an inductive load, the power factor is lower than 1 and is of a capacitive nature! (see figure 7d)

The operating efficiency of the constant current transformer is first calculated without taking into account magnetic losses of the magnetic components.

In power range from 1 to 70kVA, the Q factor of choke L1L2 is normally between 50 and 200. Taking into account Fe and Cu magnetic losses in the other magnetic components, we can talk about an equivalent Q factor for the constant current transformer of 10-80. Thus equation (10) results in an operating efficiency of 90.5% to 98.7%.

This choke is wired via the C winding parallel to capacitor C (see figure 1). Choke Lscr generates an inductive current by means of the two anti-parallel wired thyristors (SCR). This compensates the capacitive current of capacitor C, the resonance operation of the constant current transformer is disturbed and the output current is reduced.

Starting with equation (4) and using the following relations:

Calculating the inductance of the Lscr choke

This investigation calculates the factor Kc. The other factors are set to 1.

The required control range for the output current can be described as follows:

The calculation is now made out of (22)

Using the changes in capacity of the capacitor illustrated in figure 9 at 3 levels (0, 50% and 100%), the core power for the Lscr choke can be reduced by a factor of 3.

When taps are provided on the output winding, only parameters Z' and Ka, or L'2 change in equation (23). In resonance operation mode of inductance L1 and capacitor Ce, equation (23) reads as follows:

For a change in output current between 7A and 2A, the number of turns on the tap must be the smallest output voltage.

The main advantage of this version can be described as follows:

This selection is normally made in the following conditions:

In the above-stated operating conditions, the output current Iout.nom is kept constant with a current by the Lscr choke. In doing so, the constant current transformer operates in non-resonance mode. 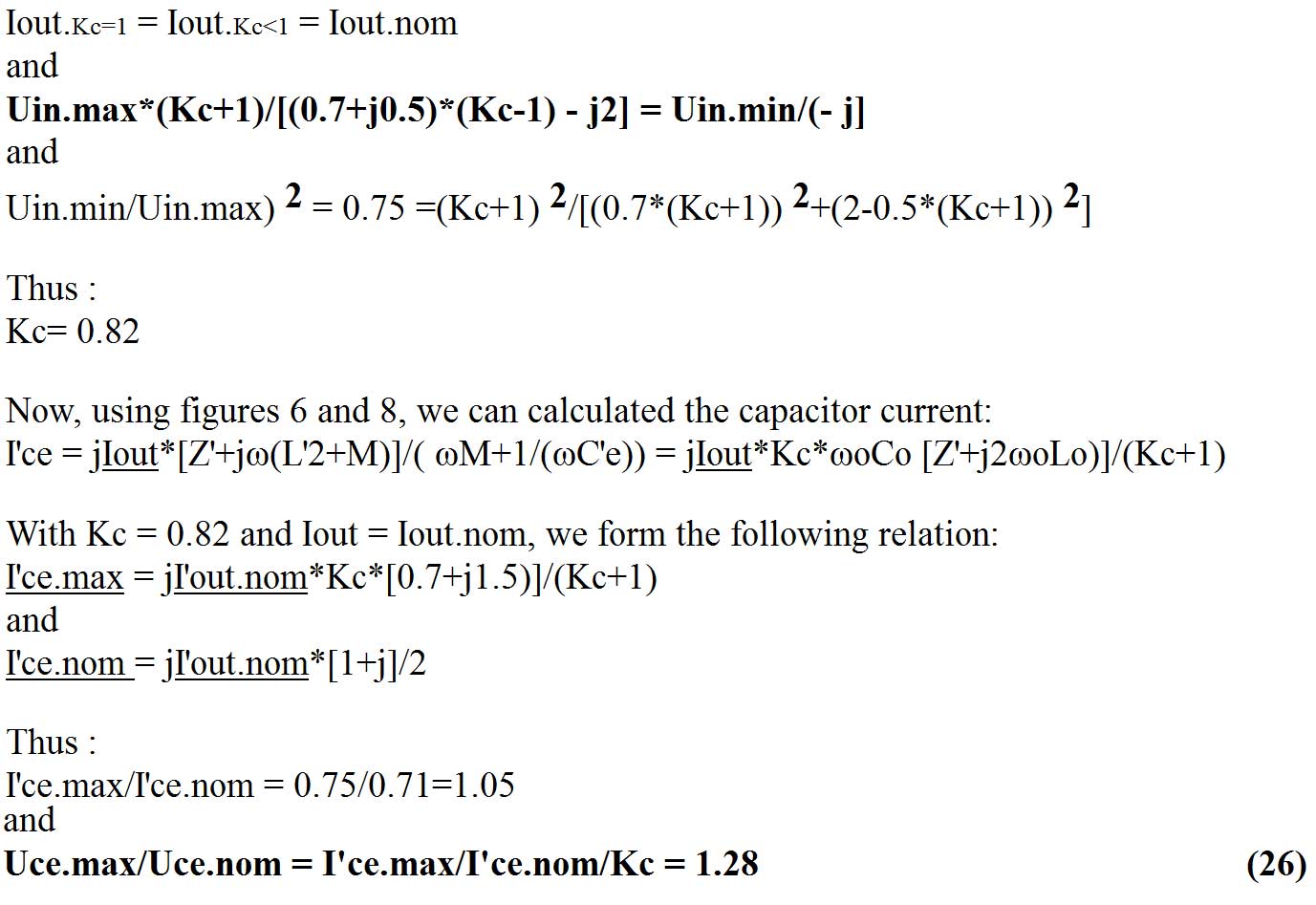 In a professional design for a constant current transformer, the transformer's magnetizing current is not a source of harmonics. Above all, with an induction of over 1.7T (17000 Gaus), the third harmonic must be taken into account.

Inductivity L'3 and capacity C' are in resonance with at three times mains frequency and "extract" the third current harmonic of the constant current transformer.

The control angle for the 2 anti-parallel thyristors lie virtually between 90 and 180 degrees. The maximum harmonic current is generated at approx. 150 degrees and is: 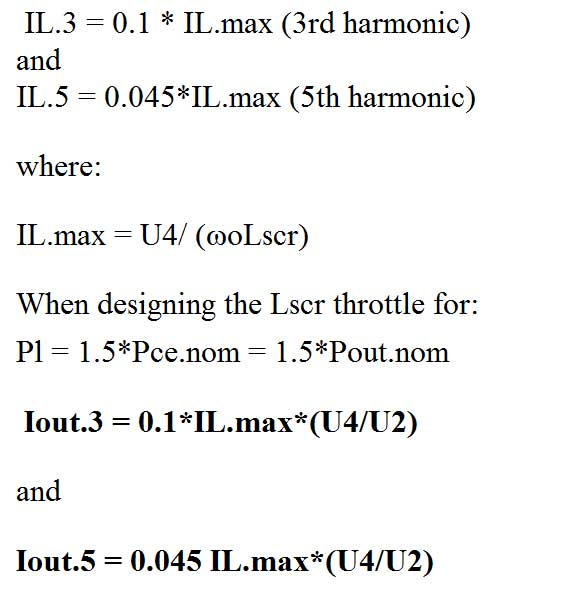 Assuming that the no-load current of the transformer in nominal operation is approximately 10%, width X of the pulse is approximately 0.15π. We can now estimate the size of the harmonics as follows: 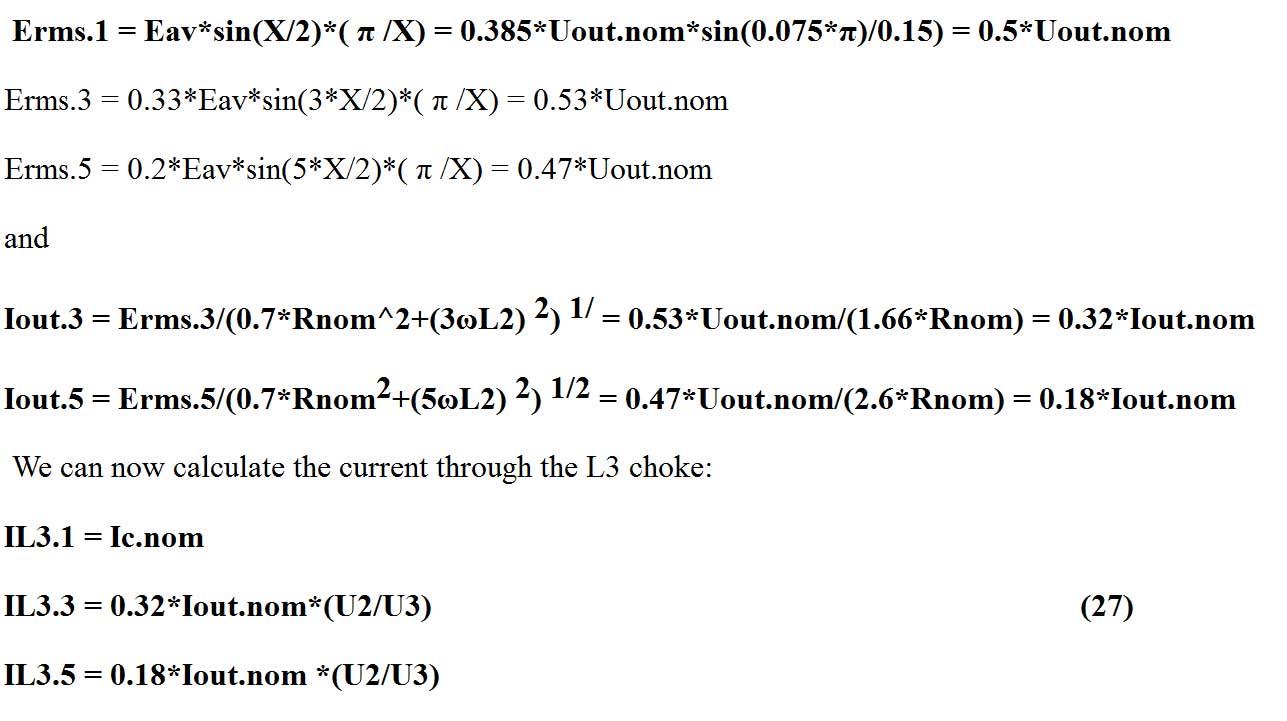 In no-load operation, the induction in transformer T rises sharply by 30%-50%. For this reason, special attention should be paid to the choice of nominal voltage for the capacitor.

W1 =>Turns of the calculated tap

In this design of primary winding and inductance, L1 resonance operation can be calculated and installed only with a tap. The different leakage inductances of the taps and the different factors of mutual inductance of the two taps result in slightly differing resonance frequencies, which can be easily compensated with the current of the Lscr choke.